Fettisdagen i Sverige | …and some Swedish adjectives

Well, since I asked two questions in one sentence, I pretty much answered the first one, by asking the other. The “fettisdagen” is when we eat “semla”. Fettisdagen is always the last Tuesday before the beginning of the Christian Lent. And if you don’t know what semla is, here is a picture. 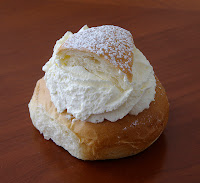 = A beloved Child has many names.

Semla in a simplified described way: Wheat bun, the top cut off,  with almond paste in the middle, lots of whipped Cream and powdered sugar on top of the lid. Mmmmmm…

Hmmm… “hetvägg” is maybe not totally a synonym. A “hetvägg” is a “semla” in warm milk, eaten in a bowl with a spoon. Like this:

How can “semla” be described?”

Practice and learn these useful Swedish adjectives – because you will most likely need to use them next time you eat a semla!

Need some help to pronounce these words? Watch this video: Swedish adjectives | Semlor in Sweden

And a semla recipe in English, for the ambitious and the poor guy not living in Sweden between January and Easter (which is the only time Swedes eat them), can be found here.

* Note that “god” in Swedish is most often used about food (and yes, also in situations like “god morgon…). Most often the Swedish word “bra” is a better translation to the English word “good”.